VAIL, Colo. — The most popular hiking trail in one of Colorado’s most-visited vacation towns snakes up a narrow valley through quivering aspen and fragrant pine trees. The views are picture-perfect in the wilderness area here — though on a summer weekend, it can be hard to take a photo that crops out the crowds.

All summer long, visitors clog the neighborhood near the head of Booth Creek Trail with illegally parked cars. They defecate in the woods. They scratch their initials into the aspens. They leave their trash. Their off-leash dogs chase the mountain goats.

The trail is still beautiful, but to longtime locals the deterioration is eye-popping. “For me, it’s like — oh my God,” Vail Town Councilwoman Kim Langmaid said recently as she headed up the mountain, hiking poles clicking against a path widened by tens of thousands of tramping feet.

The visitor boom — while great for the local economy — is putting a strain on the public lands that are, ultimately, the reason people vacation, day-trip and retire to the Vail Valley. The cash-strapped U.S. Forest Service isn’t equipped to handle the more than 12 million people who now come to the 2.3-million-acre White River National Forest each year.

So, this year, Vail and other Eagle County governments are planning to set aside as much as $120,000 to pay for Forest Service employees to monitor trails and campgrounds and enforce backcountry rules next summer.

Communities across the country are facing similar challenges as more people visit public lands, outdoor recreation becomes more important to rural growth, and federal land managers struggle with tight budgets. The growth in tourism and population has led local governments to set aside tax dollars for a purpose they might never have considered before: boosting federal agencies.

Among those spending money, Denver’s water district, the city water division of Santa Fe, New Mexico, and the town of Ashland, Oregon, are helping to fund tree-thinning projects on federal land to protect the local water supplies from wildfire. Voters in Flagstaff, Arizona, approved a first-in-the-country $10 million bond measure six years ago to remove trees from the area watershed, including on national forest lands.

Some local leaders in Eagle County see paying for services on federal land as a win-win that benefits everyone. Others are frustrated that the federal government isn’t doing more.

“We’re having to take money that we should have been using to pave streets and using it to help the federal government hire an employee,” said Vail Town Councilman Greg Moffet.

When Langmaid was growing up in Vail in the 1970s and ’80s, it was a sleepy ski town that closed for business after the snow melted.

Then Interstate 70 was completed, local businesses and organizations aggressively ramped up off-season offerings — from beer and music festivals to a new roller coaster at the top of the mountain — and the population of the Denver area, less than a two-hour drive away, grew dramatically.

A similar story has played out at the six other major ski resort towns in Colorado’s White River National Forest. Now White River’s latest surveys, from 2012, estimate that some 12 million people visit the forest every year — although today’s total is likely higher, said Kate Jerman, public affairs officer for the forest.

Nationwide, more people are visiting public lands than ever. The annual number of visitors to national forests for recreation jumped from under 143 million in 2009 to 148 million in 2016, according to federal estimates. National parks reported an increase from some 285 million to more than 330 million visitors over the same period. 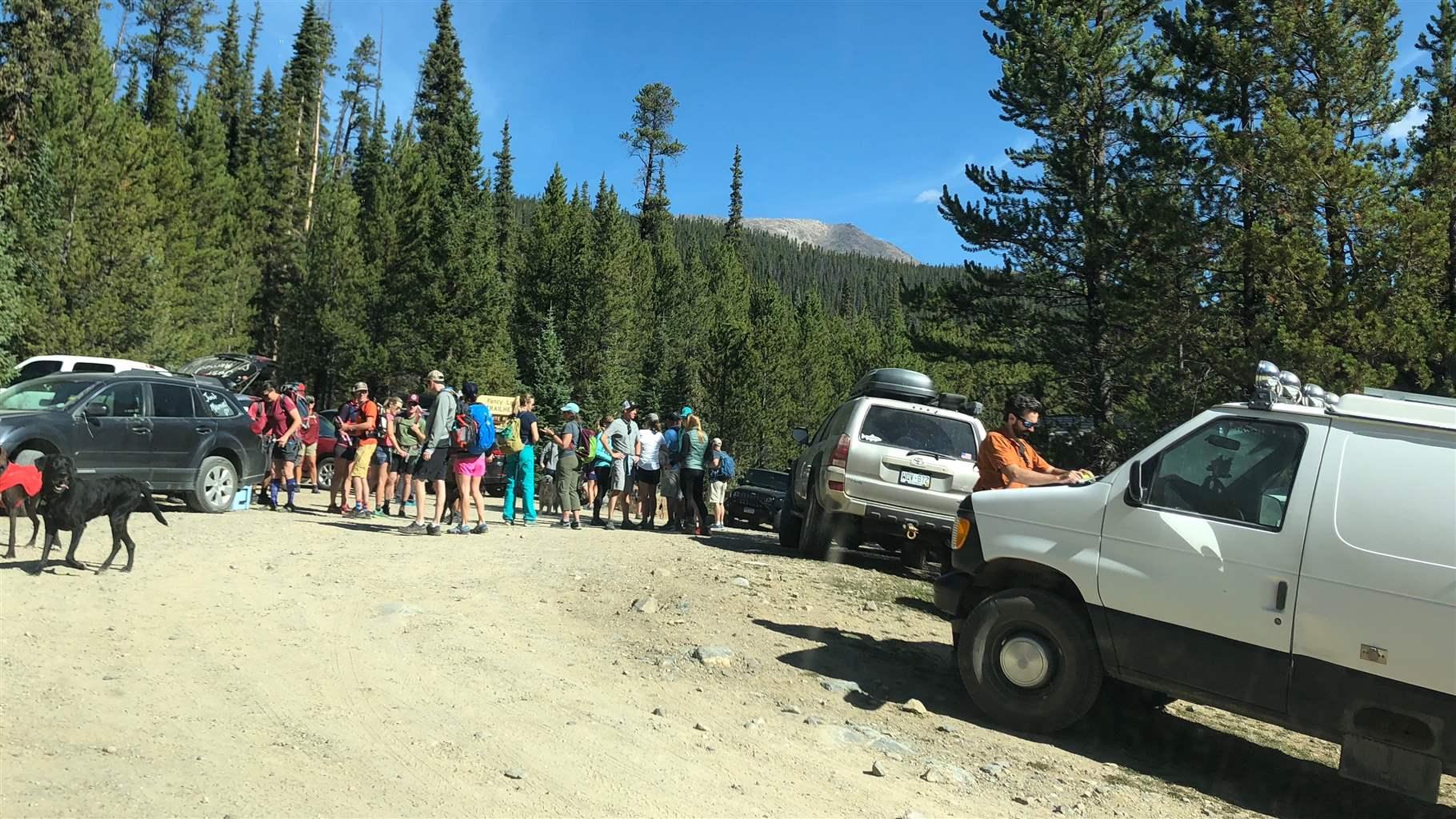 But the increase in visits hasn’t been matched with an increase in federal funding. Funding for the U.S. Forest Service has remained flat at around $5 billion a year over the past decade, in inflation-adjusted dollars. The National Park Service’s funding fell by 8 percent since 2009, to $3.4 billion, after adjusting for inflation.

Although White River brings in millions of dollars a year in fees paid by ski resorts, the money — as with all ski-area payments on Forest Service land — doesn’t stay local; it goes straight to the U.S. Treasury Department.

Funding problems have worsened in recent years as more than half the Forest Service budget has been consumed fighting wildfires. That has led to so-called fire-borrowing, when the agency raids its other programs’ accounts to pay for wildfires. Congress passed legislation in March that will create an off-budget disaster fund starting in 2020 to cover firefighting costs, which should help address the problem.

The combination of rising visitation and stagnant funding has led the Forest Service to rely more than ever on volunteer and financial help from local communities.

The forest supervisor in charge of White River, Scott Fitzwilliams, said that over the course of his career, volunteer groups and other local partners have advanced from working on nonessential projects to core agency functions.

Partners are particularly important to White River, which hosts more visitors each year than Grand Canyon and Yellowstone national parks combined — but without the big parking lots, visitors centers and large viewing platforms to support crowds around major attractions.

And White River is struggling to maintain the infrastructure it does have. Earlier this year, White River’s Eagle-Holy Cross District — which includes Vail — announced the closure of two little-used campgrounds to save money.

The district’s budget for staff who manage easily accessible trailheads, campgrounds and campsites dropped from about $270,000 in 2008 to $40,000 this year, according to a presentation Eagle-Holy Cross District Ranger Aaron Mayville gave before the Vail Town Council in July.

Right now, the district has just one seasonal employee handling tasks such as restocking toilet paper, managing crowds, picking up trash and writing tickets when people do something illegal in the forest. With more staff, the Forest Service could address problems before they escalate. Better enforcement of campfire rules, for instance, could prevent wildfires.

Many local governments across the country are helping pay for projects on Forest Service land, by partnering either with the agency directly or with the National Forest Foundation, which was created by Congress to support the national forest system.

Colorado’s wealthy, recreation-dependent mountain towns are unusually willing to use local tax dollars to support the Forest Service. That includes setting money aside to improve amenities — Gunnison, for instance, is helping to pay for new toilets at a trailhead — and projects that improve forest health.

Vail has paid for tree thinning around the perimeter of town, to protect neighborhoods from wildfire, and has also paid for gates to protect elk and deer habitats.

Covering the wages for Forest Service personnel is a new step for the town, although it’s following in the footsteps of its neighbors.

This year Summit County and several of its towns pitched in more than $130,000 to pay the salaries of four seasonal Forest Service employees and allow sheriff’s deputies and special field operations officers to do extra fire-prevention patrols on Forest Service and non-Forest Service land. The Forest Service workers monitored campsites and trails, shared information about preventing wildfires, extinguished unattended or abandoned campfires, and picked up trash.

Garfield County and the City of Glenwood Springs have helped pay for seasonal Forest Service staff to manage crowds flocking to Hanging Lake — an attraction that has become a must-see for hikers in the area.

“In some ways, it’s a Band-Aid approach,” Fitzwilliams said of staffing partnerships. But the bandage can hold things together while the Forest Service works on a long-term fix. In the case of Hanging Lake, where booming visitation has degraded the trail and led to parking chaos, the solution will be a shuttle program and fee system.

Greg Clifton, Vail’s town manager, emphasized that the Forest Service didn’t ask the town, or the county, for money to hire seasonal staff. The local governments offered to lend a hand. “We see this as really good natural resources stewardship, and something that has to happen.”

Vail’s leaders have reached out to their congressional representatives and advocated for more Forest Service funding, Clifton said, but the town “can’t wait” for Congress.

U.S. Rep. Scott Tipton, a Republican representing Colorado’s 3rd District, has sponsored a bill under which forest regions would keep half the rental fees they collect from ski resorts on federal lands, but similar bills have stalled in recent years.

The Eagle County partnership, which has yet to be finalized, would likely involve an investment of between $100,000 and $120,000 from the county and its towns, Clifton said. Fitzwilliams said the Forest Service would provide uniforms, vehicles and training for any new personnel.

When Clifton and the district ranger first presented the idea to the town council in July, the response was an immediate “yes.”

“Of course, because we have to, it’s how we pay the bills around here,” said Moffet, the council member, in response to the presentation. But he added that it could set a bad precedent. “Once we take this on, it will never get fixed in Washington. We’ve solved the problem for them.”

Other state and local leaders say it’ll be better for everyone if states, localities and even private citizens step in to help solve problems on public lands.

“Federal agencies just plain need help. There’s no magic bucket of federal money that will rain down from the sky — especially with the level of fires we’re having to fight,” said Luis Benitez, the director of the Colorado Outdoor Recreation Industry Office.

His office is interested in redefining the basket of funding, he said, possibly through ideas such as allowing forest users to donate money to help maintain public lands in the state.

Vail’s Langmaid is the founder and vice president of sustainability programs at Walking Mountains Science Center, an outdoor education center based in Avon that has been a partner of the Forest Service for years. She says it makes sense for local nonprofits and towns like Vail to help protect the forest and make sure visitors have a positive, safe experience.

“For better or for worse, I think it’s a good thing, because it gives us an additional sense of responsibility and stewardship,” she said. “We’re the ones promoting all the events and bringing the visitors here.”