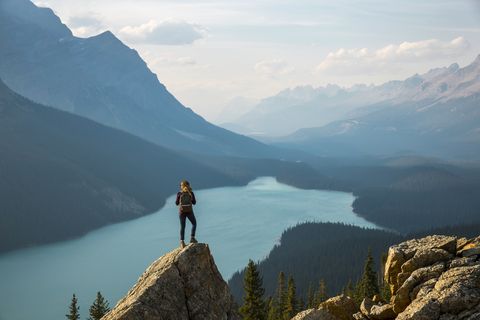 We all know that spending time in the great outdoors can boost our wellbeing, increase fitness levels, and reduce feelings of stress and anxiety.

But now, a major new study by scientists from the University of East Anglia has officially confirmed the “significant and wide-ranging health benefits” of spending time outdoors and living closer to nature.

The findings, published in the journal Environmental Research, revealed that exposure to green spaces can boost your health in so many ways, including reducing the risk of type 2 diabetes, cardiovascular disease, premature death, and high blood pressure.

The team of scientists analysed data of 290 million people across the world, by compiling evidence from 140 studies, to determine whether nature really does improve your health. The data was taken from 20 countries, including the UK, the US, Spain, Australia and Japan.

Comparing the health of people living close to nature and those with little contact with green spaces, the researchers set out to examine the relationship.

“We found that spending time in, or living close to, natural green spaces is associated with diverse and significant health benefits,” Caoimhe said. “It reduces the risk of type 2 diabetes, cardiovascular disease, premature death, and preterm birth, and increases sleep duration.

“People living closer to nature also had reduced diastolic blood pressure, heart rate and stress. In fact, one of the really interesting things we found is that exposure to green space significantly reduces people’s levels of salivary cortisol – a physiological marker of stress.

“This is really important because in the UK, 11.7 million working days are lost annually due to stress, depression or anxiety.”

Why are there so many health benefits?

The study authors didn’t conclude what causes the relationship between good health and living closer to nature but suggest that “people living near green space likely have more opportunities for physical activity and socialising”. They are also exposed to a variety of bacteria which could help boost the immune system.

So with this in mind, make sure to fit in as much time in nature as possible to feel the full health benefits.