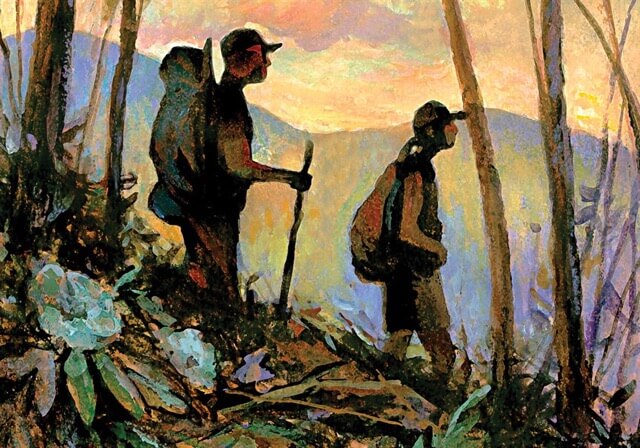 A backpacking trip in the Rothrock State Forest and day hikes in the Laurel Highlands and Shenandoah National Park in Virginia were among the Penn State Outing Club’s 2018 spring-term events.

After this weekend, though, the 98-year-old organization has nothing on its calendar, and unless things change, it won’t.

The Outing Club isn’t allowed to go outside anymore.

According to an announcement posted by the club on its website last week, the university will not allow the club to organize and run outdoor, student-led trips starting next semester.

“This is a result,” the announcement said, “of an assessment of risk management by the university that determined that the types of activities in which PSOC engages are above the university’s threshold of acceptable risk for recognized student organizations.”

After a two-month review that did not include consultation with student Outing Club leaders, the university’s offices of Student Affairs and Risk Management made the determination that the hiking, canoeing, kayaking, trail building and camping activities the student-led club has long engaged in are too risky. The club is one of the oldest entirely student-run organizations at Penn State.

“Student safety in any activity is our primary focus,” Lisa Powers, a Penn State University spokeswoman, said in an email response to questions about the school’s assessment.

Ms. Powers said the university conducted reviews of all campus recreation-supported student groups — 76 sport and three outdoor recreation organizations — to evaluate student safety risks and produce assessment reports. She declined to provide a copy of the assessment report for the Outing Club, saying it is not a public document.

She said university staff members from the Campus Recreation, Risk Management and Student Activities offices have met with the Outing Club’s faculty adviser and student leaders during the past 15 months about safety concerns related to the club’s activities and practices, and “how those activities can be more safely pursued.”

But Richard Waltz, the Outing Club’s 2017-2018 president, said club leaders talked to the club adviser and university staff about the safety issues, but not the risk assessment office that made the decision.

“Safety is a legitimate concern, but it wasn’t an open dialogue,” Mr. Waltz said. “What’s happening to the club is a shame and negatively impacts the student experience.”

And Timothy Hackett, the Outing Club’s outgoing treasurer, said he knows of no student injuries on any Outing Club trips over the four years when he has been at the school. He said the club did not participate in the risk assessment and has not seen the finished report.

He also said the 169-member club has worked with the university’s staff-run Outdoor Adventures program, which offers the same type of activities and trips as the Outing Club, to fully comply with all university policies during the past school year. The changes include more stringent trip leader and safety officer qualifications, more detailed trip planning and evacuation contingencies and lower leader-to-participant ratios.

Ms. Powers responded, saying the university conducted a “proactive risk assessment,” that was not based on any previous participant injuries. She said PSOC activities were rated high risk because they take place in remote environments with poor cell phone service, and sometimes far from emergency services.

The Outing Club collects a $20 dues payment at the beginning of a semester and then charges $5 to $10 for trips. Counting gear, food and gasoline, each participant would typically pay $25 per trip.

The cost of Outdoor Adventure trips bumped up from between $30 and $60 last year, to between $90 and $130 this year, Mr. Waltz said, and appeal to different participants.

“The two programs offer very different experiences,” he said. “The Outing Club is very accepting and welcoming of students who may be out experiencing nature for the first time in a meaningful way. Participants learn organically and develop more of a mentor-mentee relationship over the years.”

On a Penn State Reddit site, and the Outing Club’s Facebook page, reports of the university’s decision to shut down the club’s outings were derided by many as hypocritical.

Some of more than 80 Reddit posters wondered if the school will shut down its highly ranked men’s and women’s rugby teams, full-contact club street hockey, and even football because they were risky and potentially injurious.

“The absurdity and hypocrisy of this decision is not lost on me,” said a poster who goes by the name of ghostoftomthwaits. “Looking at what Penn State allows for other student orgs on campus (ahem, I’m looking at you, Frats & Sororities) and even university-sponsored sports, yet they draw a line with students going hiking in Rothrock?”

Charlie Walbridge, a Bucknell University student in the late 1960s and early 1970s who joined the Penn State Outing Club to learn paddling from faculty adviser John Sweet, a national champion, called the decision “appalling” in a post on the club’s Facebook page.

“This is a huge loss for the university community,” Mr. Walbridge said in his post, and predicted other outdoor activities will move off campus, too.

In another post, he wrote: “After all the problems with hazing, harassment, and sex abuse they’re worried about the OUTING CLUB?? Ridiculous!”

Ms. Powers said meetings between the Outing Club’s student leaders and the university are “ongoing” about the club’s future role on campus.

Those talks are focused on the possibility of “forming a different kind of club,” Mr. Waltz said, one that still holds film festivals and hosts speakers, but can no longer lead students on walks in the woods.

He said about 50 students attended a club meeting on campus Tuesday night and expressed hope that the club can stay alive.

“The Outing Club has been through many changes in its 98-year history, and our focus now is on trying to keep a community of like-minded people together,” Mr. Waltz said. “We recognized the university has made its decision and we expect it will stand by that decision. We have to work with what we’ve got and adapt.”

The new PSOC board issued a statement saying, “ … the community that has grown up around the Outing Club is not going anywhere,” and promising to continue working with advisers and university staff “to find the appropriate structure within the university to continue to foster this ever-growing outdoor community.”

Christina Platt, the club’s incoming president, was wistful about the loss of affordable outdoor recreation experiences for students and the larger Penn State community, but recognizes that the university’s decision reflects a modern and growing response to liability concerns.

“Our increasingly litigious society is making it far more difficult for people to get outside without the fear of lawsuits for any misstep. I can hardly blame Penn State for protecting itself against further litigation after a number of high-profile scandals in the past decade,” she said.

The Outing Club’s last meeting of the semester is scheduled for 8 p.m. Tuesday in Room 350, Health and Human Development Building, State College.