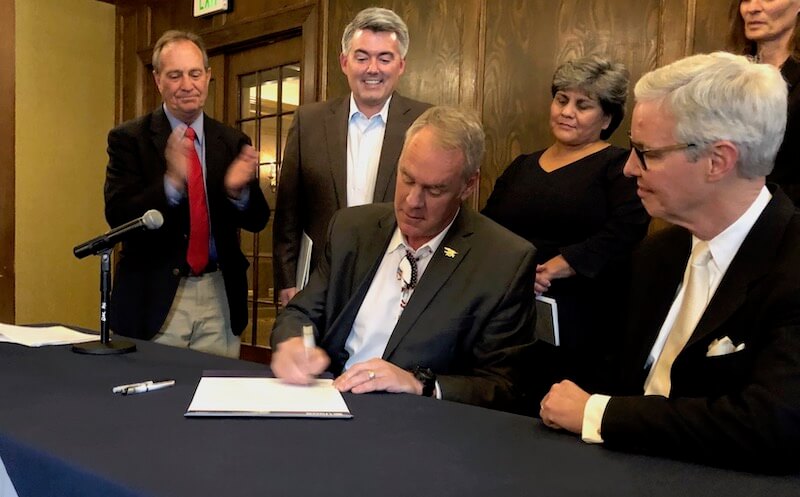 U.S. Interior Secretary Ryan Zinke signed an agreement in Denver Monday to establish a partnership between Golden’s Colorado School of Mines and the U.S. Geological Survey, the Department of the Interior’s science agency.

The partnership will bring a $120 million building — $161 million including related investments — and 150 federal employees to the Golden campus, officials said.

Moreover, it will bring major research opportunities, grants for the school, internships for the students and rising prospects as Colorado continues to become D.C.-West.

The deal moves the federal minerals research lab from the Federal Center in Lakewood with a “significant” expansion in its mission, Zinke said. The work will be housed in the new Subsurface Frontiers Building. USGS will lease facilities there, but the school plans to borrow the money and hit up the state legislature for a $20 million state investment.

The USGS already maintains the Geologic Hazards Science Center and the National Earthquake Information Center on the Mines campus.

“The focus is to look out West and look at the right institutions and bring out field scientists back from working behind a desk to working in the field and collaborating with really smart people,” Zinke said after signing the agreement at the Denver Athletic Club Monday afternoon.

He said the administration “wants the best science, so that when the USGS makes a decision, we want to make sure it’s based on the best available science from the greatest minds the country has to offer, and we think this partnership leads us to that conclusion.”

The agreement comes as Zinke’s department is eying another Colorado location — Grand Junction — as a potential site for the national headquarters of its Bureau of Land Management, along with other potential gains for the state.

Zinke and President Donald Trump are looking at a reorganization of the Interior Department to move regulatory agencies closer to the property and issues they regulate.

Grand Junction is in competition with other Western cities. A short list hasn’t yet been released.

Colorado Politics asked Zinke if the partnership bodes well for moving BLM to the Western Slope.  U.S. Sen. Cory Gardner, a major driver of the Grand Junction bid, jumped in ahead of Zinke, saying, “That’s a great question,” and turned to the Interior secretary.

Zinke, a former congressman from Montana, answered by saying interests in the West don’t always feel well-served by decisions made in Washington.

“We’re trying to get people out in the right positions,” he said. “… This isn’t any rocket science in management to put people in the right place to make decisions quickly and make sure there’s an issue and a face behind it and not just a piece of paper.”

Pressed on Grand Junction’s position in the race, he replied, “They’re in the running.”

Mines President Paul C. Johnson said the deal had been in discussions for a couple of years, with Gardner and U.S Rep. Ed Perlmutter, D-Arvada, at the university’s side.

He said Mines faculty and students would get the opportunity to assist the federal government’s best researchers, as well as work with very high-end scientific equipment.

Gardner talked about the complex legislative and bureaucratic hurdles that had to be overcome and spoke of the bipartisan partnership he and Perlmutter enjoyed on the project.

“This will be a model, I think, around the country for the work we can do when we take the private sector, our universities and the resources of our government to a university setting to cooperate to get great things done,” Gardner said.